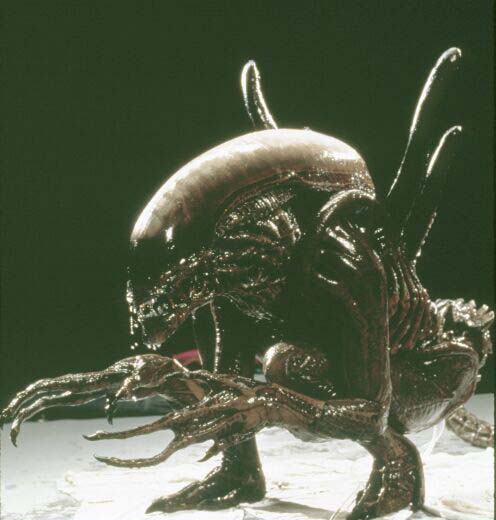 This is the alien warrior from Alien: Resurrection. Tom played the warriors in this film and Tom plays most of the characters we create. Whenever there is a man in a suit required at ADI we put Tom in the suit. The reason being that he is an excellent in-suit performer. At this point he has more experience than virtually anyone else in the movie business. He is able to communicate expression and subtilties even encased in pounds and pounds of latex rubber. With this character we tried to be true to much of what was established in the original film and make subtle improvements in terms of sculpture and execution of the suit to make it more mobile. Hopefully when the audience sees the characters in Alien: Resurrection it doesn't feel like a different creature but it feels somehow more improved and more lifelike.
Displaying photo 7 of 10
« Previous Photo Next Photo »
Back To Gallery Page
Photo Details was last modified: March 21st, 2019 by Webmaster