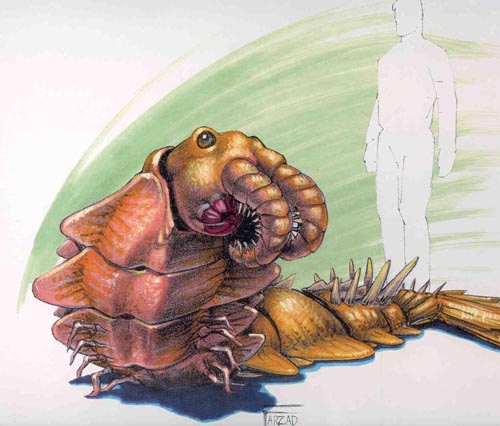 While producing the film Tremors 2: Aftershocks Stampede Entertainment and Universal also started developing Tremors as a TV series. The series premise was that, after their success in fighting the Graboids, Val and Earl would be sought out by the readers of tabloid newspapers, believers in UFO’s, etc. to battle other little-known creatures. This drawing is based on an actual prehistoric shrimp-like thing. It was quite large and, as you can see, pretty fearsome looking. Val and Earl are called to battle it when it suddenly begins attacking boaters in a recently flooded dry-lake bed. We were borrowing on the desert brine shrimp, which lay dormant for years until brought to "life" by the infrequent rain. This was one of the ideas which was made into an episode of Tremors The Series in 2003.
Displaying photo 7 of 7
« Previous Photo Next Photo »
Back To Gallery Page
Photo Details was last modified: March 21st, 2019 by Webmaster